Talk Community is an initiative from Herefordshire Council, to strengthen the community by supporting each other.

IE Brand was the agency tasked with bringing the brand to life and launching it with an engaging multimedia campaign.

Herefordshire Council serves just under 200,000 residents, with a high proportion of over-65s – a number that is growing. Talk Community is a partnership between the Council and other services, to build more resilient communities for a better quality of life, health, and well-being.

IE Brand created Talk Community's new look and feel, a brand for and by the people of Herefordshire. We developed a 12-month marketing plan and numerous creative executions across film, print, out-of-home, and digital.

What we did for Talk Community...

Faced with an ageing population and the rising cost of social care, Herefordshire Council needed to secure the long-term future of its residents.

Looking ahead, the Council needed new ways to maximise its budgets for a sustainable future. Their aim is to help communities to become more resilient with a better quality of life, health, and well-being. The dramatic events of 2020 – both the global pandemic and local flooding – showed the positive impact when communities come together to help one another.

They were keen to develop ‘Talk Community’ – a joint initiative between the Council and other local partners to support the community to help each other. The idea had been hatching for a while as part of the Council’s county plan and a network of community hubs was already in place. The Council wanted to grow the number of hubs and volunteers, but also establish a much broader remit for Talk Community.

After 18 months of planning and research alongside the Business Consultants at Mountain Perspective, the Council was ready to turn Talk Community into an initiative that everyone can be proud of across Herefordshire.

The Council brought IE Brand on board to turn Talk Community from an idea into a new brand, visual identity, website, and regional launch campaign.

IE’s brand consultants began by reviewing the Council’s existing research findings and immersing themselves in the work done to date. We delved into Herefordshire life, getting to know the people and businesses that make the county what it is. 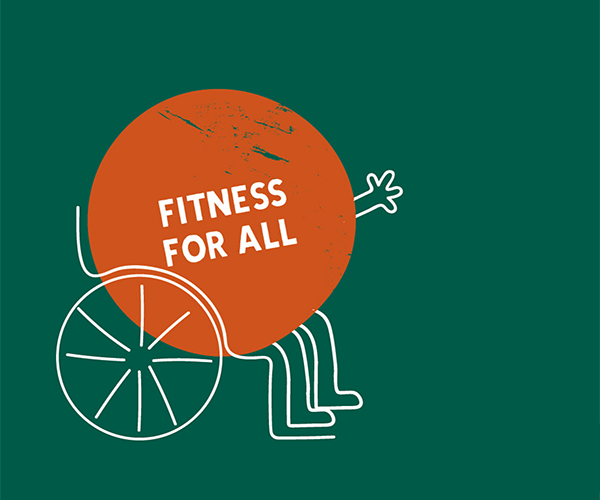 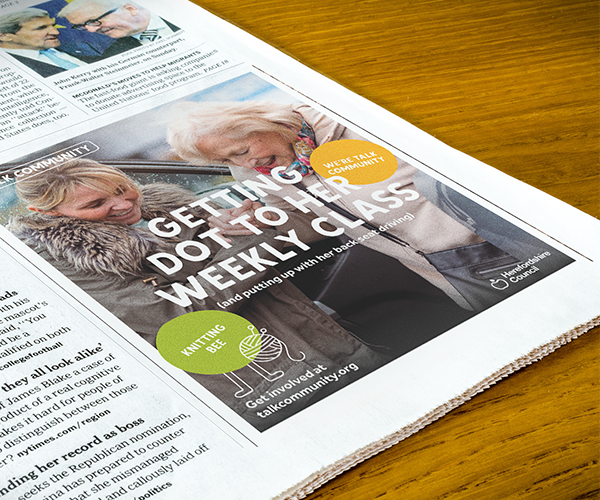 IE provided fantastic guidance and expertise on designing the brand strategy which gave a clear overview from the beginning of the project, and they worked hard to ensure that key stakeholders and partners were engaged throughout the process. From the beginning, we wanted an impactful and thought-provoking brand and campaign to support our communities, which IE scoped, developed, designed and successfully project managed the rollout to our Talk Community branding. We have received an enormous amount of positive feedback on the campaign and brand which has provided us with a great foundation for the future.

These insights led to a series of recommendations for the direction of the brand.

We realised that the concept of Talk Community needed to be stripped back to basics. It has to stand the test of time, with a simple message that everyone in the community can get behind.

Partnership at the heart of the brand

Our consultants boiled down Talk Community’s brand essence to just one word: Partnership. It’s a term that’s widely understood and conjures positive associations around commitment, respect, and a sense of being stronger together.

This idea of partnership became a helpful way to determine what fits within the Talk Community remit, and what doesn’t. Statutory council services tend to be one-way in nature – council taxes aside – and those continue under the Herefordshire Council name. But if you're setting up a support hub, there's a two-way value exchange: the Council provides funding and support, while the resident provides their time and effort free of charge.

That two-way partnership is what Talk Community is all about.

Stakeholder insights showed that we needed some healthy distance between Talk Community and the Herefordshire Council brand. We needed to show its authenticity as a brand for Herefordshire, by the people of Herefordshire – not a mouthpiece for the Council.

We structured Talk Community as an 'endorsed' campaign brand. This allows it to proudly carry a Council logo on all comms to show the link between the two and build credibility. At the same time, the brand can establish its own distinctive tone of voice – a little bolder than typical council comms.

Another service within the overall brand architecture was WISH. This was the Council’s online directory of local services – from food banks and care homes to English classes and Zumba. WISH featured a wealth of valuable content but overlapped with the aims of Talk Community. To limit confusion, we rebranded WISH as the Talk Community Directory – a change that was well-received in our stakeholder research.

The Talk Community Hubs were a great example of the kind of two-way partnership that embodies Talk Community. But we needed Talk Community to become more than that. We wanted to emphasise the many other acts of kindness and community cooperation that take place across Herefordshire every single day – no matter how small. 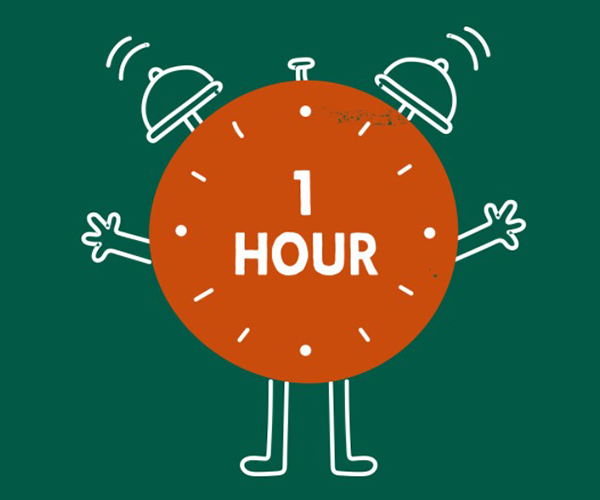 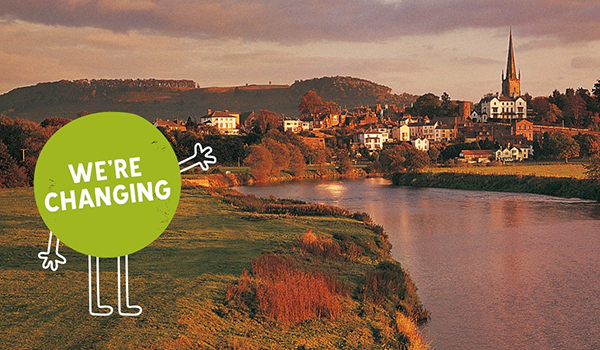 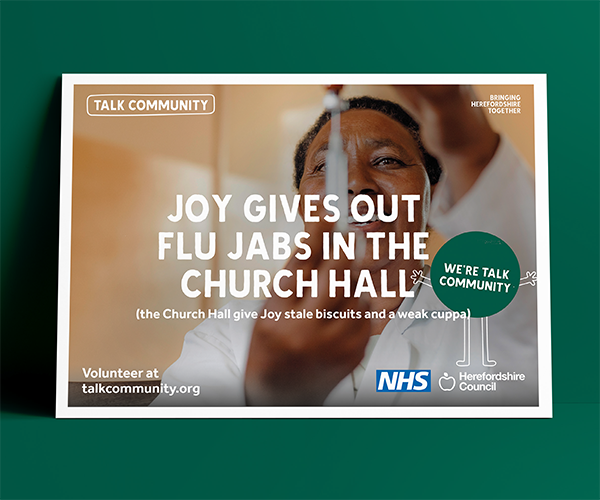 Getting the brand personality, tone of voice, and messaging right was the key challenge for the Talk Community brand.

Talk Community is the Council’s response to a compelling need. This requires a pragmatic but optimistic narrative so that residents and local businesses understand that need. We need to rally people to help one another, while reassuring them that the Council will always be there to provide the essentials. It isn't a message of council cuts and cost-saving measures, but a recognition that funds are finite. Every pound saved by communities pulling together can go back into those same communities.

Such a tricky narrative will take time to establish, but the floods and Covid-19 have reminded people of the part they can play in looking after one another. Talk Community needed to build on this goodwill.

Above all, we wanted Talk Community to be honest, collaborative and fun. It’s also dynamic, altruistic, caring, resilient, trustworthy, and agile.

In comms, Talk Community keeps things simple – avoiding jargon and writing like you’d speak. The brand’s essence is Partnership between the people of Herefordshire and their Council. A brand that belongs to the whole community.

We built the brand identity – and the website’s information architecture – around 3 key questions:

The IE Brand design team created a flexible visual identity for Talk Community, which is friendly and approachable.

People are at the heart of the brand. The people of Herefordshire feature in all of Talk Community’s comms, with a mixture of natural reportage and editorial photography, alongside our campaign films.

We also illustrated some cute characters, to represent all facets of the Herefordshire community. They are shown supporting each other and participating in a range of activities, in combination with photography and bold typography. The characters can also interact with the Talk Community logo, which takes its inspiration from the shape of Herefordshire’s street signs.

The colour palette is based on the beautiful Herefordshire countryside, from green fields and forests to meadows and autumn leaves. It’s a warm, vibrant, and natural palette made up of bold and muted tones for all occasions. We also use the Herefordshire landscapes in photography, showing both towns and countryside in warm and slightly saturated tones. 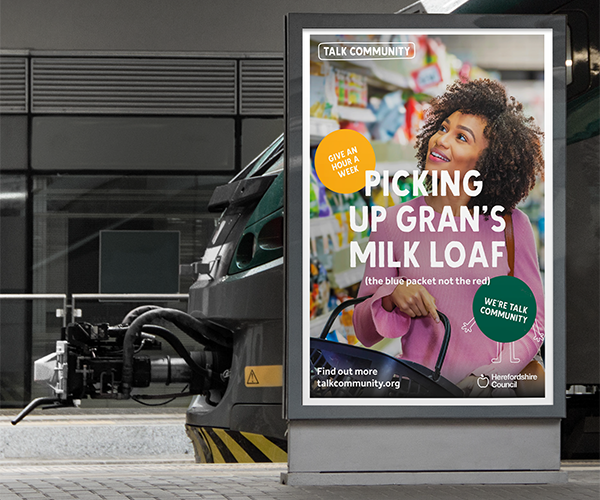 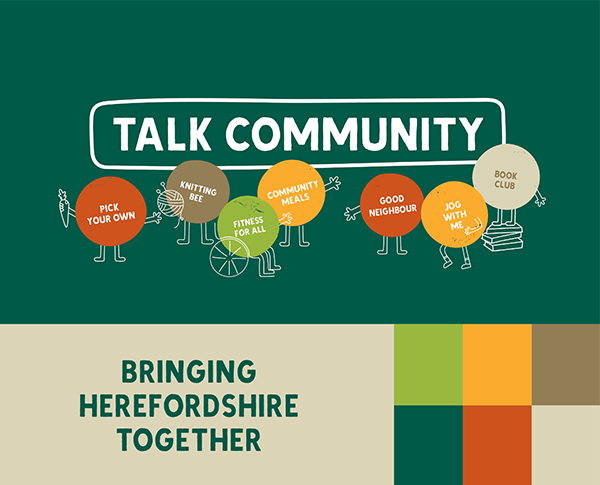 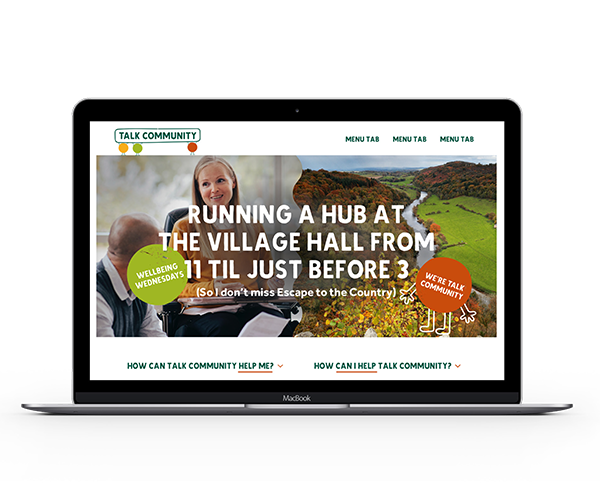 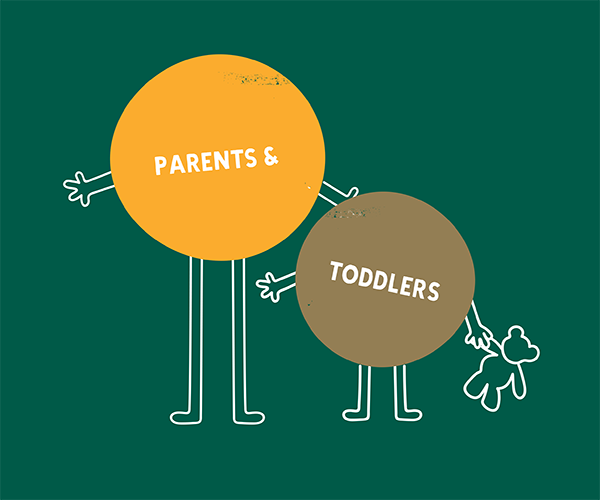 To execute the campaign, we coordinated the efforts of several specialist agencies and local collaborators, alongside our in-house creatives and digital specialists.

Talk Community is a long-term initiative, so for its first public outing we kept things simple to establish the concept. IE Brand came up with a single, clear call to action: Give an hour. This campaign was about showing people how to get involved in a spot of volunteering, without feeling they are taking on too much.

Filming, photography, and that bloke off the telly

IE teamed up with the video specialists at Shooting Reels to capture Herefordshire’s finest for some campaign films. Shot under lockdown restrictions, they feature a few of the hundreds – if not thousands – of acts of kindness happening across the region every day. We shone the spotlight on real community heroes and allowed them to lead by example – people who embody the spirit of Talk Community.

We also identified the perfect local celebrity, ‘Escape to the Country’ presenter Jules Hudson (a Herefordshire resident), to endorse the campaign and introduce the Talk Community concept. The films were scripted, art directed, and jointly edited by IE.

Short film introducing Talk Community and the people of Herefordshire who make it what it is.

IE Digital built a new website for Talk Community, to provide a front window for the campaign. The site brings Talk Community’s three central questions to life with some warm, chatty copy to complement our cute characters and other elements of the visual identity.

The site signposts the wealth of community-curated content over on the Talk Community Directory. We worked with the Council’s web developer Public Partnerships to reskin the existing WISH Herefordshire site to fit the new Talk Community brand. Eventually, the directory will get the full treatment of a content audit, redesign and rebuild.

The new web presence was unveiled quietly to users a few weeks ahead of the official launch in June.

Out of home (OOH) and print media

The newspapers, billboards, and buses of Herefordshire were awash with Talk Community’s attention-grabbing headlines and witty bylines, thanks to our partnership with Global Media.

Talk Community advertising appeared on phone boxes, 4 and 6-sheets across the county. It also appeared on bus rears and sides, 30 bus interiors, and in local newspapers. Leaflets were distributed widely across Herefordshire and of course, the 24 existing Talk Community hubs got involved too. They displayed point of sale banners and posters, and provided various resources to visitors.

Online, the campaign was supported on social media – both the dedicated Talk Community channels and those owned by Herefordshire Council – with links to the new website. 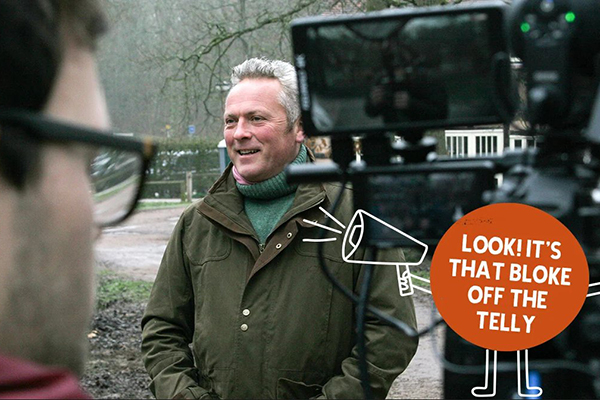 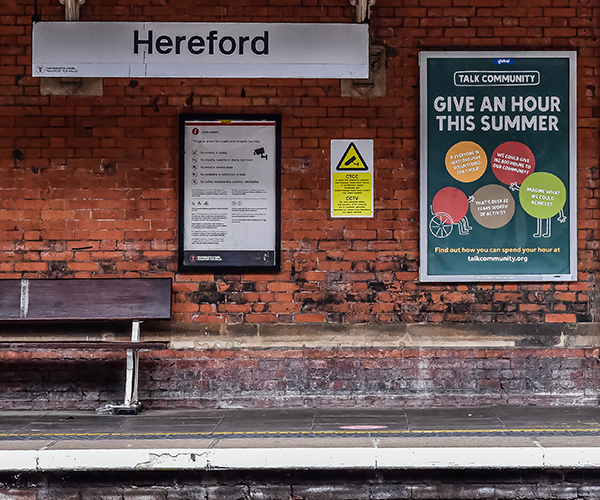 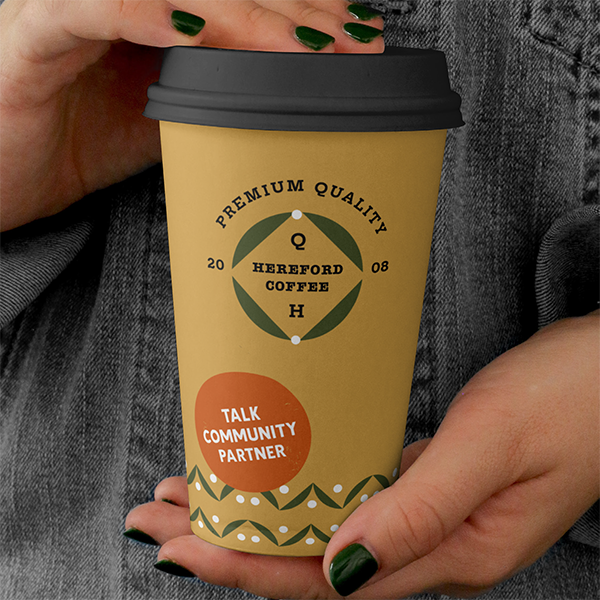 The project designs and briefs provided by IE were of an exceptional standard and have provided us with a tool to utilise in the future.
Amy Pitt
Assistant Director – Talk Community Programme, Herefordshire Council

Launch campaign across digital, print, and OOH including 6-sheets and on 30 buses