Elton or Reginald? When is the right time to risk a rebrand, or even a name change?

In this extract from IE's not-for-profit branding white paper, we take a look at the factors that can lead to a decision to rebrand your organisation.

An organisational rebrand can be a risky endeavour for any charity or not-for-profit. They can come with much anxiety – and cost – attached, so it’s not a decision to be taken lightly.

A rebrand should only ever be considered after first gaining strategic and operational clarity. First establish why you exist, what you intend to do, who your key target audiences are, and maybe even who else is operating in the space you intend to occupy, and how you are different to them.

Approaching a potential rebrand, you must have a clear answer to the questions ‘why?’ and ‘why now’?’ You must be able to describe the gap between your current position and your desired position.

Use these arguments to gain the buy-in of your trustees and senior management team. If you’re thinking of bypassing these big questions and any stakeholder research, and simply plumping for a superficial change of logo – then it’s better not to do anything at all.

There are a number of triggers that might give you an indication that it’s time for a rebrand:

We’ve got a new strategic plan

When an organisation lays out a new five year plan, it’s often accompanied by hard and soft targets. Often, this can lead to the daunting realisation that awareness and engagement levels need to significantly improve in order to realise this vision.

And while personnel change and business strategy may bridge some of the gap, clients often realise their brand has become a liability rather than an asset, when it comes to achieving their goals.

This was the case for the peacemaking charity CHIPS, who had identified an urgent need to drive up fundraising to meet their ambitious strategic objectives. That meant deepening engagement with existing, loyal audiences, and recruiting new, multi-generational, supporters.

However, the CHIPS brand had become neglected, while the overall charity landscape has become much more sophisticated. Realising the importance of a strong brand to enable them to engage with their audiences, CHIPS sought the support of a major donor for a rebrand, and asked IE Brand to help them re-articulate their story. 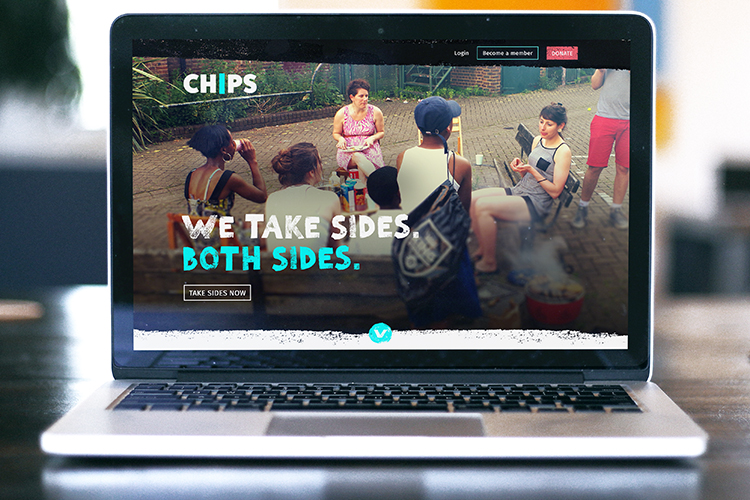 Another sure-fire sign that an organisation is on the decline is a drop in stakeholder support. When leadership teams see dwindling numbers, it’s often a catalyst for commissioning a branding exercise to arrest the decline. This can provide marketers with a healthy budget, and a strong appetite for change, but if you’ve left it this late, you’ll face an ever-harder hill to climb.

Recently, IE worked with Christian Aid, who wanted us to sense check their messaging before they committed to a large, national advertising spend. They’d seen a drop in support and there was a perceived drop in trustworthiness, credibility, presence and determination from supporters towards the brand.

We advised that in the 1970s and 80s Christian Aid had a really simple proposition – one based around the concept of poverty. In essence, they offered donors a simple exchange: they have nothing, you have more than you need. Help us to help them. It couldn’t have been simpler. But in the 21st Century, Christian Aid found itself deviating from that story. Terms like ‘poverty’ were perceived to have become dated, and the charity sector’s vocabulary had moved to terms like ‘injustice’ and ‘inequality’. And they’d responded to the zeitgeist. All well and good, but it wasn’t playing well with supporters, because it was too difficult to decode.

As a result, Christian Aid revisited its brand positioning, brand story and key messages, before proceeding with their planned marketing spend. In effect, taking a step back to take a confident leap forwards. A visit to the current Christian Aid website today sees a return to stronger messaging around their commitment to ending poverty worldwide.

The organisation is changing

Significant change often leads to a brand project. This might include a merger, or a change in senior leadership. New teams often like to make their mark on an organisation, and it’s not uncommon for a rebrand to emerge once new teams have settled in to the job. That’s because brands can be really effective signals of change.

When IE rebranded the Westminster Drug Project to WDP, they were addressing some seismic changes in the organisation. Having grown significantly through a number of mergers, the charity was going from strength to strength – improving the health, wellbeing and social integration of service users. However, this meant that there were multiple subsidiary organisations that needed bringing into the fold. What’s more, Westminster Drug Project were no longer based in Westminster, they had long since begun tackling dependency issues beyond drugs, and (after 15 years) they were certainly no longer a project. The name was a barrier and the branding inconsistent.

Some of these merged service providers fought to preserve their legacy names, so we recommended a phased transition for these sub-brands, beginning with a ‘House of Brands’ approach (think Unilever), before phasing out the individual names. They eventually adopted the acronym WDP – already in use among many staff, clients and service users – across the board.

A word about changing your name

There are times when a name change proves impossible to avoid. The example above for WDP was a no-brainer, and nobody would disagree that it was a wise move for the Spastics Society to rename as Scope. Sometimes either the world – or indeed your organisation – has changed so enormously that a new name proves to be the only viable option.

But for every Scope, there’s a fiasco of Royal Mail proportions (who famously rebranded to Consignia only to change back the following year). Or King’s College London that was forced by a student backlash to abandon its plans to change its name to ‘King’s London’, despite already having spent £300,000 on a rebrand.

Brand as a person

We love the analogy of brand as a person, so let’s use that metaphor for a moment. Why would I change my own name? I have spent a lifetime building my reputation. That reputational value is bound up with my name – it’s part of my identity. And my name’s fairly distinctive. It’s not doing me any harm. I might decide to evolve it a little – maybe I can afford to call myself Dave instead of David?

But the only sensible motives for a total name change would be: If I committed or was the victim of a serious crime, on the run, or on the witness protection programme. Or, if I decided to become an actor, a comedian or a musician. In that case I’d have an agent and promotion budget and I might want a name that’s a bit more ‘Elton John’ and a bit less ‘Reginald Dwight’.

But, in general, we’d advise caution if you’re thinking of changing your name. It takes a lot of time – and very deep pockets – to successfully implement a name change. In other words, you have to take your existing audience with you, before you can even think about telling the rest of the world. So it’s only worth doing as a last resort, and as a result of compelling research, or good old common sense.

The launch of a new brand waves a metaphorical flag at the world, announcing that “Something significant has changed around here” – something that demands a second look. But beware the vanity rebrand, simply to prove something to your predecessor or to leave a legacy, before you move on to pastures new.

Not-for-profits: why, when, and how to rebrand

Join myself and IE's Digital Services Director Ed Wilkinson at chase live 2019 for our break-out session:

If you’re thinking of bypassing these big questions and any stakeholder research, and simply plumping for a superficial change of logo – then it’s better not to do anything at all. Do it right – or just don’t do it.

Ollie Leggett
17 Feb 2017
Removing the mask: using brand to show the ‘real you’